Why did Sandusky's wife call victim weeks before his testimony and how much did she and six adopted children know about Penn State 'paedophile'? 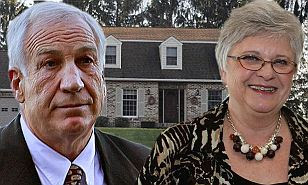 Jerry Sandusky’s wife has been largely absent from the analysis of who knew what about her husband’s alleged sexual abuse of eight boys over a 15-year period.

But Dorothy 'Dottie' Gross Sandusky does make an appearance in the 23-page Grand Jury indictment which graphically details the charges against the 67-year-old former Penn State coach.

Mrs Sandusky, 68, attempted to call one of the victims in the weeks leading up to his testimony, despite the fact the now 26-year-old had cut off all contact with Sandusky two years prior.

She left a message on Victim 7's phone saying the matter was 'very important' but the man, who told the Grand Jury that as a ten-year-old in 1994, Sandusky hugged and inappropriately touched him, did not return the call.

Part of that alleged abuse took place in the Sandusky family’s State College, Pennsylvania, home, in which Dorothy and her husband raised their six adopted children. Sandusky claimed he and his wife could not have any of their own.

Over the years the couple became the parents to Ray, now 46, a businessman living in Nashville, EJ, 41, former Nittany Lions player, and now a football coach at West Chester University, Kara, 38, a Penn State graduate, Jeff, 35, a former Marine, and 33-year-olds Matt, a Penn State graduate and Jon, who is Director of Player Personnel for the Cleveland Browns.

Quite how much any of them knew about the sexual abuse, which occurred between 1994 and 2009 with a number of incidents at the family home, is now under scrutiny. Read More